A field of the Character type can hold at most 254 characters. To store textual data of unlimited length, use the Memo field type. Actually, the data are stored in a separate *.FPT file whose name matches the name of the current DBF file. The size of the Memo field is limited only by the available disk space.

To view the full value of a Memo field, double-click the cell (or press Enter). The field's value will be displayed in a separate window containing the text box: 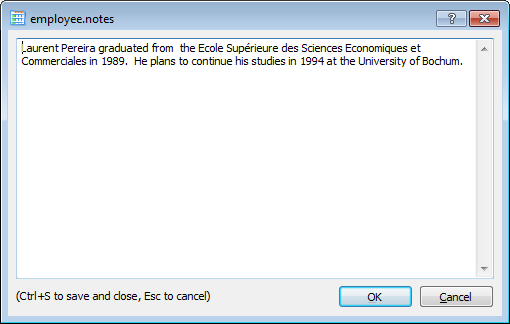 In the text box, you can modify the value. Then click OK (or press Ctrl+S) to save the changes, or click Cancel (or press Escape) to discard them.

If you change the structure of a DBF file containing Memo data, a Memo backup file will be created, with the *.TBK extension. The purpose of the *.TBK file is similar to that of the *.BAK file (backup of a DBF file). If you do not need the backup file, you can delete it.

By the way, dBase files can hold Memo data, too. The effect is similar, but the Memo data is stored in the *.DBT file.

If the same directory contains the current DBF file's backup files (*.BAK or *.TBK), they will be deleted.

The BLOB data type lets you store binary data of any kind, such as text, an image file, an executable file, or a stream of bytes, and of any length. BLOB stands for Binary Large Object, and the size of a BLOB field is limited only by the available disk space. In the File Structure dialog box, the BLOB type is called General. The binary data itself are stored in a separate *.FPT file, just like in case of Memo.

DBF Commander Professional lets you store an image data in a BLOB (General) field, since it is the most frequent and useful way to process pictures along with DBF files.

If you have a DBF file with the General type field, you can view or edit image data by double-clicking a cell (or by pressing Enter). A dialog box will open: 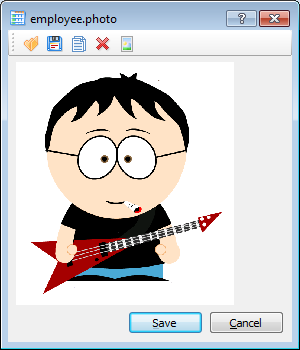 If the field contains an image, it will be shown in the window (see the picture above). Otherwise, the <EMPTY> inscription will be in place of the image. You can use the following commands to handle a BLOB field image:

After making changes, you can Save or Cancel (Esc) them.